Many things we take for granted back at home in New York City are simply unavailable or slow to get around here.  If you’ve tried to call us on our Alltel cell phone, you probably got cut off at some point.  Alltel is the only cell phone carrier who has invested in putting towers on the Cheyenne River and Pine Ridge reservations.  We are grateful for the signal this has provided our phones, but it is still patchy.  Your best bet for a strong signal is a hilltop, taking a road on the perimeter of the reservation or getting close to a cell phone tower, which aren’t always near towns.  We spoke with a native woman today who took her Alltel phone to New York City, only to discover it didn’t work on the east coast because Alltel doesn’t have roaming agreements with carriers there.  Our provider, AT&T does provide roaming service around the country, but has no compatible towers in this area – we must be in the 1% of the country they can’t guarantee service. 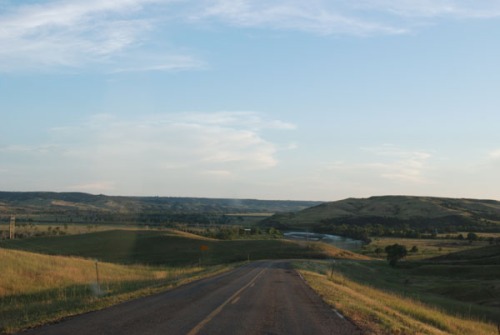 Internet is another story.  Getting a fast connection requires the installation of a costly satellite dish.  There are no cable lines laid so DSL and wireless are not options.  There are no “internet cafes” on the entire 4,266.987 sq mi of the Cheyenne River Reservation, which is comparable to the size of Connecticut.  If you want access to the internet, you can visit the Dupree YMCA in the center of the reservation.  We also heard that there are two computers at the sole small public library on the reservation, but we have yet to confirm they have internet. 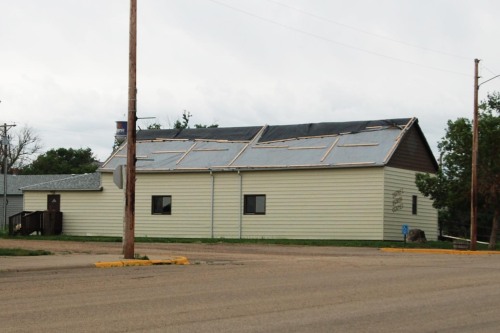 Yesterday in Dupree we saw first hand some of the destruction caused by 23 tornados, which simultaneously hit the town on June 16th, 2010.  Though much debris has been cleaned up, evidence of the damage is clear on the houses and farm structures.  Many of the houses are missing parts of their roofs, replaced by plywood, and a lot of windows are boarded up.  Given that it has been extremely rainy for the past few months, it is clear that these patches are not sufficient.  A woman, who works at the YMCA, ironically confirmed this during a rainstorm yesterday.  She was concerned about her house, which had been damaged by the tornadoes, and had unfinished repairs by the Housing Authority maintenance crew.  She described long waits for service, and mentioned soft parts of the roof and ceiling in several areas of her family’s home.  She was not expecting any follow up service, despite the fact that she feels the job is not finished, and was worried about the effects of yesterday’s rain on the house.  We are told that the Housing Authority receives money in lump sums.  They spread it as thin as they can, to help out as many people as possible, until they run out of money.  Then they wait for more.  This explains why so many of the windows in Dupree are boarded up.  When the next sum of money comes in, hopefully the Housing Authority will install new windows.  There is no telling when that will occur.

This entry was posted in Cheyenne River, Housing, Infrastructure, Photos. Bookmark the permalink.