Posted on August 25, 2011 | Leave a comment
With each visit to Pine Ridge Reservation, we come across examples of innovative, sustainable building projects. In mid-August, we returned to visit Bryan Deans, who runs OLCERI (Oglala Lakota Cultural & Economic Revitalization Initiative) from his ranch in Slim Butte, on the southern side of the reservation.  On the way, we stopped by a building project outside of Pine Ridge (the town). The team, led by Texas Natural Builders and Earth Tipi, is building a “pallet house,” which incorporates many of the materials and techniques we have seen in cob and straw bale buildings, but uses reclaimed shipping pallets as the material for the wall structure.  The head of the building team, Dave, explained that this saves on the cost of raw materials, as the pallets are usually discarded and can be easily collected for little or no cost. 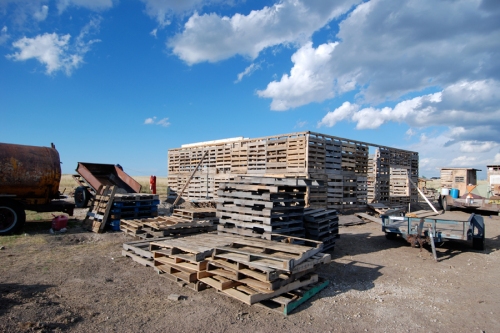 A gravel-filled drainage pit surrounds the home, and the walls are built upon several layers of earth filled bags, hammered flat. Once they create a frame, the walls will be filled with a light straw/clay infill and covered with 2” of cob and a layer of plaster finish, which Dave said should insulate to R20.  The pitched roof will be insulated with cellulose (R30), and finished with pine shake shingles. Large windows look out from the front and back of the house, facing North and South, and deep overhangs will be built to shade the house and protect the walls from rain.

The kitchen and bath will receive water from the tribal water lines, and the bathroom will have a composting toilet.   A solar panel will power basic electrical needs, and the owners have a 2000 watt generator as backup. For heat, the home will have a rocket mass heater built into the living room. A propane stove will be used for cooking, and an on demand propane heater will heat a small storage tank of water.The floor plan offers one kitchen / living space, 2 bedrooms, a bathroom and a 7’ loft space which is accessed by a staircase from the main living room. The home is being built for the Goings family, who were building a home for themselves until it was destroyed during last year’s rough winter.  Seven people will share the space, four adults and three children.We asked the builders for a sense of cost, manpower and timing to build the structure and were told that the total cost would be around $10,000 and that a core group of 8 people could put it together in 6-8 weeks total. In conversations since, we learned that the total cost will probably be closer to $15,000 – still a far cry from $90,000which builds a “traditional” house for the Housing Authority. 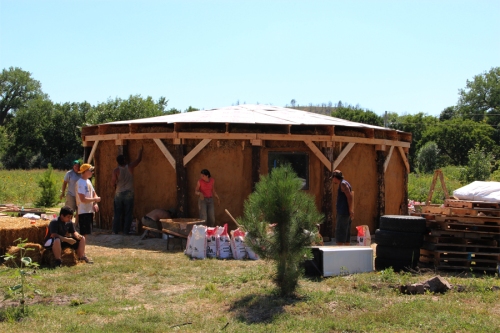 The next day, we visited Henry Red Cloud’s land, between the towns of Pine Ridge and Oglala, where a team of volunteers were building a straw bale roundhouse. On the land, Henry Red Cloud has built a workshop for building and training in solar technologies – Lakota Solar Enterprises. The workshop houses volunteers and materials.  Henry partners with the organization Trees, Water, People (based out of Colorado) and there were also many volunteers from RE-MEMBER.  In addition to volunteers who live off reservation, we met a number of tribal members from other reservations. One woman was from Cheyenne River Reservation and is interested in building a home on her land next summer, while also inviting her friends and neighbors to take part and learn.  Another man had traveled from Fort Hall reservation in Idaho (Shoshone tribe) and was planning to teach what he learned about solar heating and natural building when he went back.

This building was smaller than the pallet house, but was planned to be completed in two weeks. It was round, and it was planned to be divided into about three rooms – a main living space and two bedrooms. At the time of our visit, they had been working on it for three days and accomplished a lot. The structure was up, as well as the roof, and they were at the point when plaster is mixed (water, straw, sand and clay) and thrown against the straw bale walls.